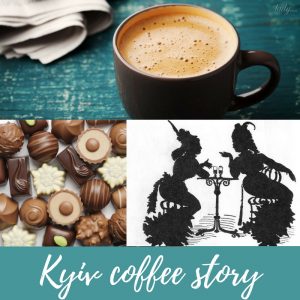 Coffee… is an amazing, delicious, and charming drink. Oriental and very European. Traditional and able to change. Coffee came to Kyiv in the 19th ct. but it was known already in the 17th ct. Oriental tradition to drink coffee in small Turkish or Turkish alike cafés that were widely distributed in parts of Ukraine under Turkish control or on the border with the Crimean Tatars in the 17th– 18th ct. The eternal rivals (well, sometimes friends) of the Crimean Tatars and Turks were the Cossacks who were the military strata of Ukraine. Of course, they were acquainted with the bitter taste of the drink but its consumption in public might provoke negative reaction.

This attitude has changed in 19th ct, when Kyiv and the biggest part of Ukraine became a part of the Russian Empire. Coffee came … as European drink, as symbol of reforms, renovations and progress. It was popular among foreign officers or engineers who worked in the city. And gradually became prestigious and popular among the high circles of Kyiv’s society.

However, at the end of the 18th – beginning of 19th ct coffee is not a public drink. Kyiv aristocrats enjoy it at their homes in the morning or at lunch. The richest ones even kept a special servant who was busy with coffee making only. Such servant ground coffee beans and prepared coffee in a special device called ‘lembryk’, a word that resembles Turkish ‘embrek’. Serving coffee was a special process. A small table with snow-white tablecloth was full of varied biscuits, famous Kyiv’s candied fruit, marzipans, sugar-coated nuts, tiny chocolates, liqueurs and boiled cream. Then a servant served coffee in small coffee cups. And the conversation began.

European tradition of coffeehouse as political and business clubs did not develop in Kyiv as everywhere in the Russian Empire. Kyiv’s café was a restaurant and a confectionary at the same time. It was a public place for people with a long purse. Luxury interior, palms, and sofas in oriental style. In 1840, according to a sertain regulation, ‘visitors of coffeehouses must wear decent outfit. Soldiers, servants in corresponding clothe, farmers in ordinary village dress were not allowed to enter’. Besides, coffee was an expensive product. A cup of coffee cost 20 kopeyks. It was a decent price ‘cos a jug of beer cost only 5 kopeyks.

At the end of the 19th ct – beginning of the 20th there were about 20 coffeehouses in Kyiv. For the capital of the province, it was not too much. In 60s, the most popular coffeehouse was ‘Swiss pastry shop’. Many its clients came to read newspapers. Waiting until other clients finish their reading, visitors drank coffee, chocolate, punch, and played billiard. Here you could enjoy a great variety of cakes, candies, nuts, oriental sweets.

There were only 5 coffeehouses on high level. One of them was ‘New Swiss pastry house’ that belonged to a Swiss – Bernard Semadeni. It was mentioned in many guide-books of the beginning of the 20th ct. Its advertisement was quite modest. “There are a lot of pastry-shops in Kyiv, where you can get good chocolate, coffee, tea, ice-cream and soda. Semadeny pastry-shop (1878) is especially popular”.

Most of the coffeehouses were owned by foreigners. It was a Swiss – Martin Shtifler, a business partner of Semadeni. They set a chocolate factory and two shops with buffet and billiard at the main street of Kyiv. However, his name was forgotten. A corner with the most prestigious Horodetskogo street was occupied with a chocolate and candy shop that sold production of Warsaw factory by Jan Frunzinski. Another Warsaw businessman, Franciszek Golombek founded a luxury café-restaurant ‘Francois’ next to the Opera House. An immigrant from Prussia, Georg Donterman owned an expensive but popular café-confectionery named very simple ‘George’.

Unfortunately Kyiv coffee story ended up with the beginning of the Soviet era. Well, coffee came back to Kyiv, but it is another story.