Kyiv ‘perepichka’ would scare vegetarians and detox fans. It is simple, 100% not healthy and 100% popular Kyiv meal.  You can buy it in the only place in Kyiv – in a tiny kiosk at the beginning of Bogdana Khmelnitskogo St. A line of ‘perepichka’ admirers marks the place clearly. There is also tea, coffee, and cola/sprite but it tastes like heaven only with tomato juice. So what the ‘perepichka’ is? It is something like large ‘pig in blankets’ or hotdog wrapped in dough and fried in oil. Eat it while it is hot and enjoy!

‘Vechernij Kiev’ / ‘Evening Kiev’. This probably the youngest and the sweetest symbol of the city appeared in Kyiv stores at the beginning of 80s. As compared to simple, old-fashioned recipes of Soviet confectionary industry, these cupola-shaped candies with chocolate coating and filling made of praline with whole hazelnut were luxury. Kyiv citizens especially enjoyed design of a candy box with a photo of Kreschatic Str. in the night-lights. A gift box of  ‘Vechernij Kiev’ was the best present for friends and relatives in other cities. Production of these sweets started in Karl Marx Confectionary Factory, known nowadays under the name – International Confectionery Corporation ROSHEN. 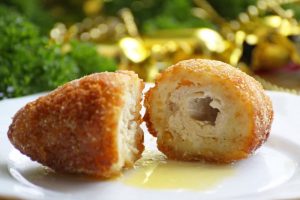 ‘Chicken Kiev’. The origin of this legendary dish is disputed. It could the USA, Russia or Ukraine. According to the USA version a dish was created by a Chicago or New York cook-immigrant who missed his home. Russian and Ukrainian versions date back to the 19th – beginning of 20th ct. It seems most likely the recipe was created before the revolution 1917 on the basis of ‘côtelette de volaille’. The last one, despite the original French name, is not known in French cuisine. However, it became basic for many stuffed cutlets in the Russian Empire. A common restaurant dish before the revolution 1917, it was forgotten afterwards, and reborn in 1947 with the name ‘Chicken Kiev’. The story tells that a chef of ‘Intourist Hotel’ in Kyiv reinvented the recipe for a foreign delegation banquette. Despite of some embarrassment caused by butter spattering from cutlets the dish became mega popular. Today ‘Chicken Kiev’ is a minced chicken cutlet stuffed with butter and herbs, coated twice with eggs and breadcrumbs, and either fried or baked. But it is not as popular as it seems from abroad. 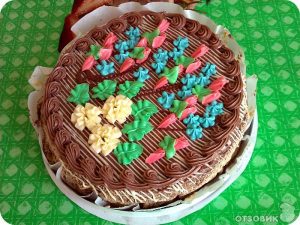 ‘Kyiv cake’. It is not just a local dessert; it is the quintessential Ukrainian capital. The legend tells us that two bakers of Karl Marx Confectionary Factory (known as Roshen today) forgot to refrigerate the egg whites for the biscuits. The next day they decided to conceal their oversight by making unusual meringue with cashew nuts (later, as a variation – with hazelnuts), chocolate glaze, and a butter cream between two layers of meringue. The top of the cake was decorated with floral ornamentation depicting the blossoming chestnut (the informal coat of arms of Kiev). ‘Kyiv cake’ became the most recognized symbol of Kyiv during the Soviet times. Together with a candy box of ‘Vechernij Kiev’ it was the most popular present from Kyiv. Its popularity was so high that a train circulating between Kyiv and Moscow got a nickname – ‘a cake bearing train’ because of the passengers with almost a compulsory ‘Kyiv cake’. 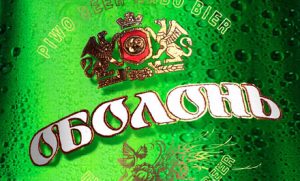 Obolon beer. Beer history of Ukraine dates back to the darkness of the Middle Ages. However, it is hard to say how it tasted like. Modern travel-guide books compare Ukrainian beer with Czech beer, and the comparison definitely makes sense. There are many beer styles as the German lager styles widespread in the Czech Republic. The well-known beer producers, one of the national leaders – the Corporation Obolon was also connected with the Czechs. At the end of 70s, Czech experts were engaged in the project of construction of the huge brewery on Kyiv suburbs. The word ‘Obolon’ origins from medieval times and means the water-logged meadows. The availability of huge reserves of soft, crystal-clear water determined the construction site. The brewery was named after the district it was situated in – Obolon. Today the plant produces a variety of beers, low alcohol, soft drinks, and mineral water.